“The celebrated and humble rest together at Oakland. Tycoon and pauper, Christian and Jew, black and white, powerful and meek, soldier and civilian—all are here.” This one line taken straight from their website speaks so beautifully as to what this place is.

I have been studying under Trent Chau and the trip to Oakland was my final assignment. I had never been to this particular spot, though when I mentioned it to a few people they immediately spoke of its beauty and history, confirming that no other place in the city can rival its grandeur.

I hope you enjoy seeing the grounds from my perspective. There is more information from their website at the bottom of the post. 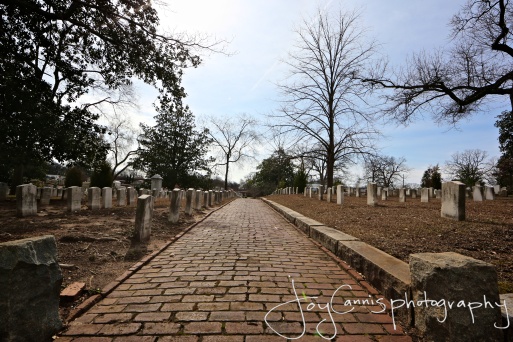 City through the yard 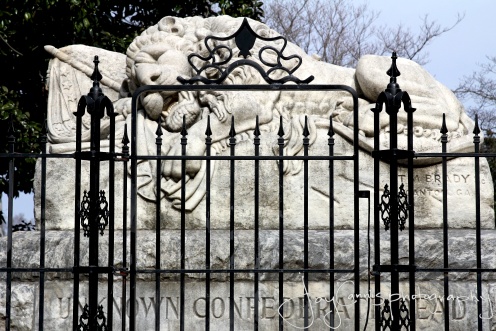 View through the trees

Cross on a hill

Figures carved from stone droop in sorrow, gaze pensively or reach to the heavens. The best known is the massive “Lion of Atlanta,” marking an estimated 3,000 graves of unknown Confederate soldiers disinterred from the battlefield. Icons are everywhere, employing symbols that speak a language of grief unknown in contemporary culture. The expertise of Historic Oakland Foundation plays an important role in preserving knowledge of 19th Century funerary symbolism and communicating its meaning.

Maynard Jackson, Atlanta’s first African-American mayor, and Ivan Allen, Jr. became the 26th and 27th mayors of the city to be buried at Oakland, joining six Georgia governors. Margaret Mitchell, author of Gone With The Wind, is also buried here. So are golf great Robert T. (Bobby) Jones; Joel Hurt, one of the city’s leading developers and entrepreneurs; Atlanta historian Franklin Garrett, Bishop Wesley John Gaines, founder of Morris Brown College; Carrie Steele Logan, 19th Century founder of Atlanta’s first orphanage for black children which continues today as the Carrie Steel Pitts Home, and others who played a role in Atlanta’s evolution. Many of Oakland’s graves are etched with familiar names borne by Atlanta parks, streets, neighborhoods and businesses. For every lavish monument marking a prominent or wealthy family, there are hundreds of small, simple headstones. Not far from some of Atlanta’s best known sons and daughters are paupers buried at public expense. Here, an ornate tomb is inscribed with flowery verse—there, a plain marker merely says “Infant.”

Oakland is also the place to see some of Atlanta’s finest tree and plant specimens. Magnificent oak, magnolia, and dogwood complement delightful antique roses, and seasonal bulbs. Oakland’s cherry laurel is recognized as the most outstanding in the city. In honor of Oakland’s horticultural importance, the 2003 and 2004 Southeastern Flower Shows awarded Historic Oakland Foundation its prestigious Legacy Garden gift of plantings.”

Be in the Know